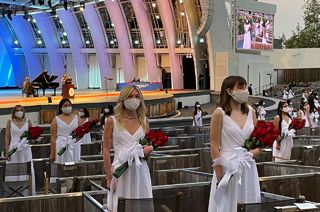 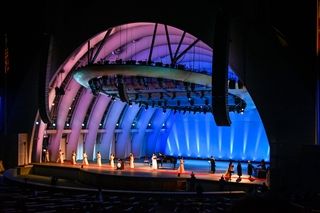 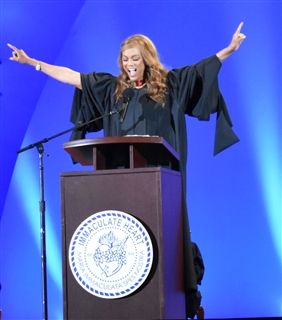 Back to the Hollywood Bowl!

Shimmering in white and bearing bouquets of red roses, 108 graduates crossed the stage at the iconic Hollywood Bowl and received their diplomas during Immaculate Heart High School’s 115th commencement.
The June 2nd ceremony marked a milestone for members of the Class of 2021 as their families cheered their achievement. The evening event also signaled a tentative return to normal after the pandemic forced the closure of the Hollywood Bowl last year and prompted Immaculate Heart to hastily arrange an alternative ceremony for the Class of 2020 on its campus.

With COVID-19 protocols in place at the Bowl, Immaculate Heart’s traditional commencement still looked a bit different this year.

For example, the graduates, still masked and socially distanced, were only allowed on the Bowl stage to receive their diplomas. They could not assemble on risers and sing their graduation songs by tradition under the Bowl lights. Instead, the students were scattered in box seats in front of the stage, where they listened to their recorded songs and watched their photos appear on the large screens that flanked the stage. Similarly, family members required tickets for admission and were spaced out accordingly throughout the Bowl’s increasingly higher seating sections.

Addressing the difficulties of the past year, class speaker Danielle Sanchez told her fellow graduates, “It is an understatement to say that we have been dealt a very challenging hand. However, again and again I am reminded by my classmates of the strength we have to continually push beyond adversity and see light – to be the change we wish to make and to guide others on the same path.”

Similarly, commencement speaker Tyra Banks, an Immaculate Heart alumna as well as a successful entrepreneur, TV personality and supermodel, acknowledged the resiliency of the students and encouraged them to make a positive difference in the world.

“Class of 2021, the world you live in today has presented you with unprecedented challenges and heartbreaking revelations that shout out for the need for deep change,” Banks said. “Because we are Immaculate Heart fighters and we don’t give up, we climb! Class of 2021, you all are leading a revolution, for this country, for the disenfranchised, for yourselves.”

The ceremony marked an emotional return to the Hollywood Bowl for Banks, who received her own diploma on that stage 30 years ago as a member of Immaculate Heart’s Class of 1991. “I have to be real with you and let you know it is one of the honors of my life to be here tonight,” she said.

Thanking the school community for the invitation to speak, Banks also thanked her parents who were in the audience in 1991 and again that evening. Recalling her own graduation, Banks said, “With a boat neck white gown, a bundle of fresh red roses in my arms, and my gold and black IHHS ring on my finger, I was ready to take on the world.”

“I would not be the woman I am today without this school,” Banks continued. “There’s something about Immaculate Heart. We have that je ne sais quoi – we just can’t put our finger on it, but it’s extra special. Our teachers are next level. Our administration loves us. And the female power they instilled in me, from middle school to high school, still resides within me and continues to reside in me, and now resides in you, tenfold.”

Joining Banks on stage were theology chair Maria Pollia, who offered the commencement’s invocation, IHHS Principal Naemah Morris, who conferred the diplomas, and IH President Maureen Diekmann, who expressed her gratitude to everyone present.

“I would be remiss if I did not acknowledge and thank every member of the Immaculate Heart School Community for their patience, creativity and resilience over the past 15 months,” Diekmann said. “Your support and commitment to each other and to our school is truly a testament to being of great heart. You make us proud – and we shine in your reflected glory.”
Back